The ancestry researcher knows that with the 1800s-1900s wave of immigration into New York City, overcrowding, illness and death also came. To aid those children who lost their parents, Orphan Trains helped them find new homes. Our RecordClick Ancestry researcher looks at these records.

An ancestry researcher can travel in time with Orphan Train Records

Many an ancestry researcher knows that New York City is and was a tough place to live.  When this RecordClick genealogist has visited the NYC metropolis on a number of occasions, I, too, have found it a challenging place to navigate.

In the mid-part of the 1800s, when immigrants seeking a new life in America streamed into New York, they came by the hundreds of thousands. Then, in the time of the growing American economy, immigration regulations were few.

In New York City, immigrant families who settled there often lived in overcrowded tenement buildings. These close quarters along with a lack of adequate sanitation and medical care meant that there were widespread illness and death among these families. Many children lost their parents and when both parents died, these young immigrant children and even those who were then born here to immigrant parents became orphans.

One small group of people provided some hope to these poor orphans and that hope translated into a current-day rich research resource for genealogists. 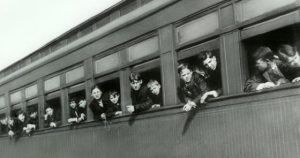 A Children’s Aid Society picture of some of the orphan the train to homes.

The numbers are a staggering. By 1850, there were an estimated 30,000 children believed to be homeless in New York City. These children had few advocates and were often left to fend for themselves.

Hope and help arrived at the creation of several agencies including

The founder of The Children’s Aid Society, Charles Loring Brace, was challenged with dealing and caring for so many children. He developed a plan for providing the youngsters with improved living conditions.

He felt a better life in a home with high moral standards and physical labor would provide more opportunities and practical education for the children. To that end, he created the Orphan Train Movement which lasted from the 1850s through the 1920s. Brace’s Children’s Aid Society was the primary agency involved in the Orphan Train effort although other groups did participate.

This Orphan Train Movement is important for the ancestry researcher because it created a paper trail for these children—young people who might otherwise have been lost to history and never recorded.

According to Children’s Aid Society records, between 1853 and 1893, over 97,000 children were able to find new homes. Children were placed on trains accompanied by agents. At stops along the way, prospective parents were given the opportunity to select a child. Orphan Trains stopped at more than 45 states across the country as well as in Canada and Mexico.

The states that received the most children during this time period were:

By the time the program ceased, over 120,000 children had been placed in new homes.

The Children’s Aid Society and Mr. Brace considered a number of factors about the children who were involved in the Orphan Train program. Knowing that many of these city youngsters would be expected to help on a farm or in a home, Brace and his staff looked at each child’s ability to adapt to a new environment and made careful selections. Staff kept records of these children’s progress.

A good amount of information regarding the orphans and their stories can be found at the National Orphan Train Complex in Concordia, Kansas. The museum and research center preserve the memories and artifacts of the Orphan Train children. Contact links for locating records are also available. The Children’s Aid Society website also has information on the history and records as well as a link to the group to which many of the surviving Orphan Train members belong.

The interest in these Orphan Train records has increased among genealogy researchers over the last several years. Because of the nature of the movement, a number of people involved and the many records, the ancestry researcher can find terrific genealogy documents in these holdings.

If you think your family tree includes an Orphan Train child, let the professional ancestry researchers from RecordClick find the records for you.