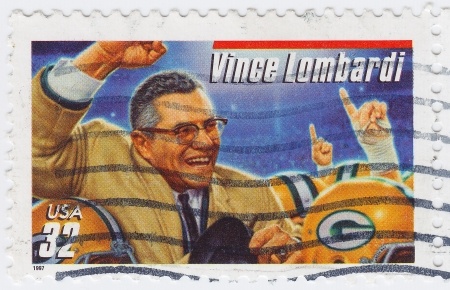 RecordClick’s professional genealogist Jean Shurtliff looks at Football great Vince Lombardi and his family’s early days in America.
There was no running back. They stayed here and did well.

This genealogist is ready for football!!!

The college season with its 39 post-season bowls is winding down and the professional football playoffs are starting up. Which, for this RecordClick genealogist, brings to mind one of my favorite football coaches, Vince Lombardi. Every genealogist should recognize his name from the championship trophy, of course.

In addition to being a great coach and good guy, he survived some terrible weather in Green Bay, Wisconsin. If he can survive that, this genealogist figures he can survive me borrowing his family for some genealogy research.

Vincent Thomas Lombardi was born June 11, 1913 in New York City, the oldest child of Harry and Matilda Lombardi. In the 1940 U.S. Census, the Lombardi family was comprised of:

Harry was a butcher. Vincent was a teacher. Madeline was a bookkeeper. Harry was born in Italy and Mathilda in New York. Vincent, although still living at home, was soon to be married. The family was living at 2808 Ave. S in Brooklyn. This is a good place for a genealogist to begin.

Vince Lombardi’s parents were Italian. His father, Harry, arrived in the United States in 1889. His mother was born in New York. By looking at the genealogy research of the family – the different members are collateral lines – we can see the family portrait as opposed to looking at one individual, parents and grandparents.

The first thing a genealogist can look at is Vince’s siblings: Madeline, Harold, Claire and Joseph. In checking newspaper reports, the genealogy researcher will find that Vince died on September 3, 1970 in the Washington, D.C. area. A requiem mass was held at St. Patrick’s Cathedral in New York City and he was buried at Mount Olivet Cemetery in Monmouth County, New Jersey. 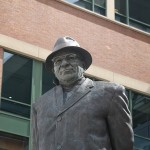 According to the Baton Rouge (LA) State Times Advocate, Vince was survived by his widow, Marie; his parents, Mr. and Mrs. Harry Lombardi of Brooklyn, NY; brother Joseph of Englewood, NJ; brother Harold of San Rafael, CA; and a sister Claire Brandshagen of Hazlett, NJ. The next step for the genealogy researcher is to check the cemetery to see if other family members might be buried there.

On FindAGrave, the Lombardis buried in Mount Olivet Cemetery are listed as:

Links are available for:

A visit to the Social Security Death Index finds that Lombardi sister Claire Brandshagen was born in 1923 and died in 1974. We have names, dates and a location for each of the family’s members. It’s something a family history researcher can dig into. One note: This genealogist has found that Italian families are usually good about keeping the maiden name as an identifier after a female marries. While working on this blog, seldom did I see a listing for Mr. and Mrs. Harry Lombardi. More frequently this genealogist found: Matilda Izzo Lombardi.

In stepping back a generation, a genealogist can get a feel for what New York was like in the first part of the 20th Century. Similar to now, some families moved on a regular basis. Other families found a place to purchase and settle into a home.

In 1940, Harry and Matilda were on Ave. S. In 1930, they lived at 2542 East 14th in an Italian-Irish neighborhood. Matilda’s mother, Laura Izzo was widowed and was settled into the home she owned at 2579 East 16th. Her husband Anthony had died in 1926. Included in Laura’s household were sons Louis, Anthony, Michael, daughter Nicholina and extended family. Their church was Saint Mark’s Roman Catholic Church located at 2609 East 19th Street.

Continuing back in time, as the genealogist often does, we find that in 1920, Harry and Matilda were renting 2547 East 14th. Anthony and Laura had purchased 2579 East 16th.

The 1910 U.S. Census sheds even more light on the families for the genealogy researcher. Harry was living with his mother, Mary. He and Matilda married on September 5, 1912 in Kings County/Brooklyn. The Lombardi household was located at 5 Spring Street in Manhattan and consisted of Mary, 57, a widow; Harry, 21; Asunta, 19; and Tony, 17. Harry and Tony were butchers while Mary and Asunta worked in the garment industry. Mary finished coats and Asunta made button holes.

In the 1910 census, Antonio Izzo lived at 2519 East 16th Street in Brooklyn. He and sons Joseph and Louis were barbers. Son Joseph was a plumber. Antonio and Laura Carvalo had married in Manhattan on June 5, 1884 when he was 19 and she was 14. Antonio had immigrated to the United States in 1880; Laura, in 1883. Antonio died in 1926 and Laura in 1930. Both are buried in Holy Cross Cemetery in Brooklyn.

Vince Lombardi worked in his father’s butcher shop for a time when he was young. However, Vince’s generation of Lombardi men found different callings. All went on to college and all left the streets they had known so well growing up.