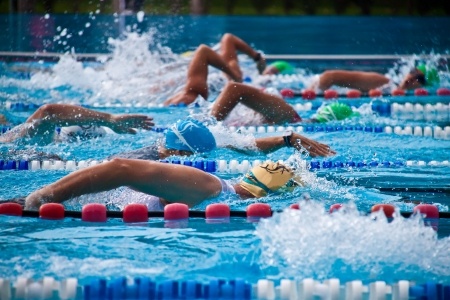 He swam into the record books and we wondered if other people in Michael Phelps’s family were amazing swimmers. RecordClick genealogist Joan Shurtliff has found that they weren’t. His ancestors were every day working people in West Virginia.

When the genealogy researcher looks for ancestors, the search can go in unexpected directions. That is always one of the aspects of the family history researcher’s journey that makes it interesting for this RecordClick genealogist.

Olympic athlete and multiple record holder Michael Fred Phelps has spent a good share of his life swimming. He has grown up learning the basics, practicing, traveling, and competing. When a genealogist searches for his family’s roots, however, one goes to a world far from the water–to a paper mill in Luke, Allegany County, Maryland. It is a world entirely different from the blue pools in an Olympic sports complex.

This genealogist has found that early in Michael’s career, The Baltimore Sun (November 21, 2003) ran an article in which his parents described their backgrounds. According to this report found by this family researcher, both said they were from Allegany County in the western part of Maryland. His mother, Debbie, was from Westernport (2010 population: Approximately 1800) and his father, Michael Fred, was from a hamlet down the road called Luke (2010 population: 65). Both of these American towns were settled in the 1700s. In the early years, Luke had a saw mill that supplied ties for the construction of the Baltimore and Ohio Railroad. Westernport was the western-most navigable port on the Potomac River. 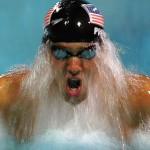 The reports found by this genealogist show that Debbie and Michael Sr. attended Bruce High School in Westernport. They participated in a variety of activities, including sports, and were high school sweethearts. Debbie’s father had a contracting business. Michael Sr.’s father was a chemical engineer at the paper mill in Luke. That is a start for a genealogist. We have found out about the family.

Here is a brief chart of the basics:

When a genealogist looks only at Michael Phelps’ paternal line, a search on FindAGrave in Allegany County, Maryland will find John William Phelps, born 24 December 1915 in Bluefield, Mercer County, West Virginia. He died on February 12, 1959 in Keyser, Mineral County, West Virginia. The son of A. Fred Phelps and Vera Humphreys, he worked at Westvaco, Luke Paper Mill as a chemical engineer.

John Phelps, grandfather of swimmer Michael Phelps, married Roberta Marie Myers on 28 March 1945 at St. Albans, West Virginia. John, born in Bluefield, Mercer County, WV, was living in Westernport and Roberta, born in Luke, MD, was living in Piedmont, Mineral County, WV. The close proximity of Mineral County and Allegany County means a good deal of movement between the two places and the genealogist should keep this in mind when researching. At the time of this marriage, only Mrs. A.F. Phelps and Mrs. Marie Myers, the mothers of John and Roberta, were living.

In the 1940 U.S. Census, Vera and Fred A. Phelps were living in Webster Springs, Webster County, West Virginia. The family history researcher will see that at this time, there were no children in the household. Fred was a superintendent of a coal mine.

In this same census, Marie and Robert Myers were living in Luke, Allegany County, Maryland. Robert was in construction at the West Virginia Pulp and Paper Company. Roberta was working in the same facility as a Labeler. This genealogist has not found John Phelps in the 1940 Census.

The genealogy researcher needs to remember that in 1940, the depression was still impacting the livelihoods of many families. The demand for paper and paper products made the era easier for residents of Allegany County. The mill provided employment for John Phelps and Robert Myers. The situation in the coal mines was similar, although many mines were notorious for poor pay and terrible working conditions. A genealogist will look at the historical context and find that the fact that Fred Phelps was a superintendent would mean that financial burdens were likely eased for him during these times. In this area, economics were still an issue, but other areas of the country had it much worse.

Both Fred Phelps and Robert Myers died at relatively young ages, according to the findings of this professional genealogist. Fred was 55 when he passed away on April 2, 1941 in Webster County, WV. Vera died on November 9, 1976. Both are buried in Raleigh County, WV. Robert was in his late 40s when he died on November 14, 1944. Marie never remarried and died in August 1973. John William Phelps died February 12, 1959. Roberta married Albert Stafford (b.1918-d.1980). Born December 15, 1919 and died in July 1984. The Myers and the younger Phelps are buried at Westernport, Maryland.

As for the paper mill at Luke, WV, the genealogists will see that it is still in operation today as the NewPage Luke Paper Mill. It doesn’t have the number of employees it once did and it has gone through financial hardships, but this mill continues to provide employment opportunities and income for area residents. To get insight on the area at the time—in the 1940s–when Michael Phelps’ ancestors worked there, watch the You Tube Video. You might even get a genealogy researcher bonus and see a descendant of the Phelps or a long lost cousin of Michael’s.

All sorts of resources are available to assist the genealogy researcher. The census and vital records are only the beginning. If you have hit a rough patch in researching, consider using an expert genealogist  at RecordClick. Our resources enhance a family history. We develop research strategies to make your family’s stories come alive. A RecordCick genealogist will make your document special.