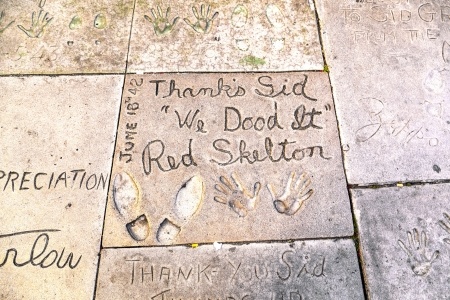 Entertainer Red Skelton was an American favorite for years. His brand of humor charmed the country.
When our RecordClick genealogist Joan Shurtliff begins searching for his family, she finds that the road to answers takes as many twists and turns as Red Skelton’s body did in his humor routines.

For this RecordClick genealogist, the idea of a good time is to search for family. Yes, I know I’m a little odd. When the real name of famed comedian Red Skelton was mentioned to me recently, my genealogy researcher thoughts got going and I thought, “Why not?”

Growing up in the days of the big three television networks, as this genealogist did, entertainer Red Skelton was a family favorite. On his television show each week, we saw that sparkle in his eye, the broad smile with dimples and heard his infectious laugh. Everyone looked forward to it all. He and his humor were full of silliness and that made it all more special.

So, of course, this genealogist has to ask:

This is also a good time to explain a bit about primary and secondary sources in genealogy research and how they can make a difference when the genealogist begins to look into someone’s family history.

A primary source is usually a document created to record an activity or event in an individual’s life. A primary source is created by a person who knew the individual. A genealogy researcher will find that primary genealogical sources may include vital and church records, a diary, government records, business records, military records and the list can go on. Primary sources for the genealogy researcher are what the good genealogist should always look for. Secondary sources for the genealogist do not have the same immediacy and often are missing the “time element”.

Secondary genealogical sources may be a family story or an article in a book or magazine. Although helpful, a secondary ancestral research source such as an encyclopedia article definitely cannot be considered a primary resource. 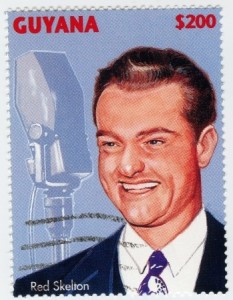 Finding the family of Red Skelton proves a challenge for the genealogist.

So, family history maven, genealogist and ancestral expert, are you ready?  Let’s go! Let’s go exploring and search for the siblings of Red Skelton.

From biographical information that Richard Bernard Skelton, himself, has provided, he was born July 18, 1913 in Vincennes, Indiana. His parents were Joseph E. Skelton and Ida Mae Fields. He was the youngest of four sons and was born two months after his father died. His father was a clown in the circus. Red Skelton left home at an early age to help support his family. The genealogist must consider this information to be a secondary resource.

According to primary sources such as the actual California death record, Richard Red Skelton, died on September  17, 1997. He was born July 18, 1913 in Indiana and his mother’s maiden name was Fields. As for his father, Joseph Skelton, this genealogist has found that there is a grave in the Vincennes, Indiana  City Cemetery for Joseph E. Skelton, b. September 14,  1880; d. May  22,1913. This primary source information concurs with the known information we have from the secondary sources with which we began.

The genealogist, when researching family history, needs always to delve into the U.S. Census which is considered a primary resource. Using the Census documents is always smart for the genealogy researcher because you will find information that has usually been provided by a family member to the census taker. The year 1910 was the last time that a U.S. Census was taken while Red’s father Joseph Skelton was alive. In the 1910 Census, the genealogist will see that in Vincennes, Indiana, there is one couple that fits with what is known:

The information fits except for the fact that Ehart is not Skelton and Joe is not a circus clown – although he could have been earlier in his life. However, the family listed before Joe and Ida is Ehart. Many a genealogist knows that Census takers made clerical errors. In this case, there are also two possible sons. This genealogist has not been able to locate the family in the 1920 U.S. Census. However, in the 1926 Vincennes, Indiana, City Directory the family history research can see that on page 264, there is a Skelton family listed:

City directories are often considered primary resources by the genealogist because these directories are created every year or two using information that was current at that time. The short-term disappointment for this RecordClick genealogist is that Richard “Red” is not listed with the family right here. But, according to his story, he left home at an early age and, by 1926 he would have been age 13 and, most likely, already gone from home.

By this time, Richard “Red” Skelton was starting to make a career for himself in show business. However, he was moving around a lot so, for this family history researcher, finding him in a census has proved to be difficult. In the 1930 U.S. Census, Ida and Paul are still in Vincennes living at 1023 N. 9th St. It should be noted that the information in every census is a little different. In 1930, the age of when they were first married was noted. For Ida, the age at marriage in the 1910 and 1930 censuses is very similar. For Paul, this genealogist does not find it to be so clear. What is going on with Paul is up for speculation. He did marry in Wayne, Indiana in 1932 and his parents are listed as Joseph Skelton and Ida May Fields.

The household in the 1930 Census consisted of:

A quick check by this genealogist of the 1900 U.S. Census finds a Fields family living at 1222 Perry St. in Vincennes, Indiana, with Susana Fields, born August 1857, listed as age 42 and head of the household and Ida Fields, born October 1884, listed as age 15 and as the oldest child. Every now and again a genealogist needs to take a side trip to other records to verify that this is, indeed, the desired family. So this genealogist has gone back to 1930.

By 1930, Ishmael had married and relocated to Mansfield, Richland Co., Ohio.

The family is listed as:

According to his Ohio death certificate, Denny I. Skelton died in June 1943 in Richland County. His parents are listed as Joseph Skelton and Ida M. Fields.

In May 1948, according to The Daily Register of Harrisburg, IL, a fire took a dry cleaning business once owned by “Chris Skelton, brother of Red Skelton, of movie fame”. In the 1940 U.S. Census, Chris Skelton, 32, and his wife, Marian, 30, were living in Lawrence, Illinois. In 1930, a city directory lists the couple as living in Detroit, Michigan. He was working for a dry cleaner.

So, just who were the Skelton brothers? From primary and secondary sources, this genealogist has put together a list:

As you see from this brief look into the life of the family of Red Skelton, the professional genealogist works in a careful and diligent process using primary and secondary sources. A good genealogist knows and finds the best records. When you hire a genealogist from RecordClick, you work with expert family history researchers who know how to find and use the records that make up your family’s history.