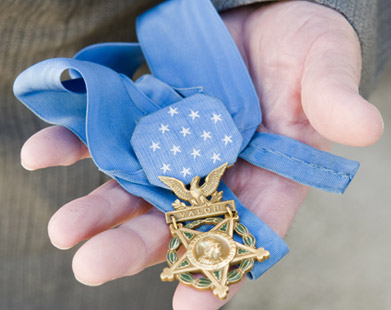 A genealogist will find that World War I produced a number of famous war veterans including General John Pershing and Presidents Harry S. Truman and Dwight D. Eisenhower whose genealogies are fairly easy to trace.

This RecordClick genealogist, however, holds a special place for those veterans who were “just folks”. They served their country honorably, but then proceeded to live ordinary lives.

This genealogist has found that regular, special person in Sterling Morelock, winner of a Medal of Honor.

The genealogy researcher might ask what exactly is the Medal of Honor. How long has it been in existence? Who are some of the honorees? A good genealogist asks questions including those about the achievements of the ancestors.

The Medal of Honor was created in 1861 to highlight acts of bravery in the Civil War. It has been awarded to over 3400 individuals in the various branches of the service. Notable recipients include Thomas Custer (brother of George Armstrong Custer), Douglas MacArthur and Arthur MacArthur Jr. (father and son) and many ordinary men and one woman who did extraordinary things in the service of the military. A list of Medal of Honor winners may be found on the official U.S. Army website.

The genealogist will find that according to the Army, Sterling Morelock was a private in Company M, 28th Infantry, 1st Division. He entered the service at Oquawka, the county seat of Henderson County in western Illinois. According to the citation, on 4 October 1918 near Exermont, France:

“While his company was being held up by heavy enemy fire, Pvt. Morelock, with three other men who were acting as runners at company headquarters, voluntarily led them as a patrol in advance of his company’s frontline through an intense rifle, artillery, and machinegun fire and penetrated woods which formed the German frontline… Morelock was severely wounded in the hip, which forced his evacuation…”

So, genealogy researcher, who was Sterling Morelock?

Although he entered the service in Illinois, he was, according to his World War I draft registration card, born in Silver Run, Maryland in June 1890. The genealogist may ask was he anxious to join the military? These are the questions that can lead the genealogy researcher to the colorful details. For example, this professional genealogist notes that on his draft registration card Sterling Morelock stated he had nervous trouble from a bad stomach. One might think he would have preferred to do any of a number of things rather than join the military. It does, however, provide the genealogist with a place to begin the deeper ancestry quest.

In the 1920 U.S, Census, the genealogist will find Sterling Morelock, 29, living with Charles and Lena Holmes in Rozetta Township of Henderson County, IL. He is listed as a foster-son. The Holmes are from Pennsylvania and Missouri. Morelock’s family is from Maryland.

In the 1910 U.S. Census, this genealogist found Morelock, 20, living in the household of Addison and Sarah Morelock in York County, Pennsylvania just across the border from Maryland. His father, born in Maryland, is a bookkeeper and Sterling’s listed occupation is laborer.

One wonders what happened to Morelock between 1910 and 1920? First came the death of his mother, Sarah, in July of 1912. Because of family circumstances, he went to live with the Holmes in Illinois. He entered the Army from there during World War I, shipping out to Europe. In the incident leading to the Medal of Honor, Private Morelock volunteered to lead a group behind enemy lines during the Mouse-Argonne drive to take out a machine gun nest. Instead of one, they found by the light of flares, five destroying them all with grenades. Morelock escaped without injury at this time, but did have his hip hit by shrapnel later while attending a wounded soldier.

Morelock first returned to Illinois. The genealogist will see that he then opted to go back to his home country in northern Maryland and southern Pennsylvania. He spent over eleven years in and out of hospitals recovering from his shrapnel wound. In the process, he got a steel hip replacement.

The next genealogy researcher question would be: What happened to him and when did he received the Medal of Honor?

For the genealogist, government documentation provides a wealth of information. For Sterling Morelock, it only begins with the U.S. Census and World War I Draft Registration Card. There is a detailed process of nomination for the Medal of Honor including a recommendation package submitted by the Service Secretary. The package must also receive approval by the Chief of Staff of the Army, the Secretary of the Army, the Secretary of Defense, and the President of the United States. More information can be found in the U.S. Senate Committee on Veterans’ Affairs Report, Medal of Honor Recipients: 1863-1978 (Washington, D.C.: Government Printing Office, 1979). The process may also be found by the genealogist described on the Army website.

Morelock received the Medal of Honor in 1922.

Morelock’s government involvement did not end with the Medal of Honor. In 1926, Rep. Mr. John Clayton Allen of Illinois petitioned for financial relief for Morelock (Journal of the House of Representatives, H.R. 10787). In the Catalog of Public Documents of the 72nd Congress (July 1, 1931 to June 30, 1933), Morelock passed the civil service examination for Guard and was appointed Guard with the Department of Agriculture. Shortly after the appointment, he moved to Pittsburgh, went to work for the Veterans’ Administration and remained a civil servant until his retirement in 1957. He became active in the Disabled American Veterans and is listed in their annual reports for a number of years between 1933 and 1962.

Sterling Morelock, one of the last World War I Medal of Honor recipients in Pennsylvania, died in September 1964 and was buried in Arlington National Cemetery– a hero in every sense of the word.

Government records and reports cover a vast array of areas and topics. Make your complex search simpler with the help of an expert genealogist from RecordClick.