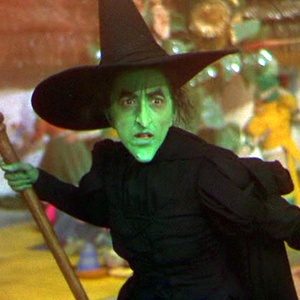 Our RecordClick genealogist Joan Shurtliff isn’t scared of witches. For this Halloween,
she looks right at one and sees a lot. Oz’s Wicked Witch of the West, played by Margaret Hamilton
didn’t have a terrifying family history. Genealogists will see that they were nothing like the characters in Oz. Instead, they were
a rather fancy family from Cleveland.

So while the ghosts and goblins are preparing for their spooking night, Halloween, this RecordClick genealogist has her mind on that vile and scary Wicked Witch of the West from the 1939 classic movie, The Wizard of Oz.

Every genealogy researcher doesn’t have to look at a census of Oz or the local Oz death records to know that the Wicked Witch of the West was there, played by actress Margaret Hamilton. While best known for playing that shrill and terrifying witch, Margaret Hamilton had a career that spanned six decades and included roles in Broadway theater as well as in movies and television. Different from that of her green-faced Wicked Witch, Hamilton’s story is a much more pleasant one to tell.

Born in Cleveland, Ohio in 1902, Margaret Hamilton was the youngest of four children born to Jennie (Adams) and Walter Hamilton.

The genealogist will see that the history of the Hamilton family in Ohio goes back to the early days of the state. A family history researcher will find that Walter J. Hamilton was a successful attorney in Cleveland, Cuyahoga County. Located by this professional genealogist, the 1910 U.S. Census lists Margaret’s parents as:

Margaret’s father, Walter, had a father who was a lawyer as well. According to death records, Walter’s parents were Edwin T. Hamilton and Mary E. Jones. Death records for Margaret’s mother, Jennie, indicate that her name was either Jennie Mary or Mary Jennie. Her parents were Edgar Adams and Mary J. Adams (Elliott), according to records located by this genealogy researcher.

Burial records play a role in this story—and not because of any “witching”. Genealogists should always be aware that at the location of someone’s grave, a genealogy researcher may find extra information on the person’s ancestors.

Many of the members of the Hamilton family and their extended genealogy are buried in Lake View Cemetery in Cleveland. It is a large cemetery with over 100,000 burials. A genealogy researcher will find that some of the family burials listed on FindAGrave are:

The family history researcher should note that information on sources such as FindAGrave always needs to be verified with, for example, vital records.

Oz’s Wicked Witch of the West died a very different death than the actress who played her.

For a quick verification, this genealogist looked at the 1880 U.S. Census and it lists:

This genealogy researcher has determined that George Elliott, Sr. was probably the husband of Mary because they are both buried in Lake View Cemetery plot, Lot 107-B. The FindAGrave volunteers wisely have included plot information which is a terrific help for the family history researcher.

The Hamiltons were part of Cleveland’s upper class. They arrived in the area before Ohio achieved statehood and played a role in land development there.

According to the 1880 U.S. Census, Margaret’s maternal grandfather, Edgar Adams, was the proprietor of a picture store. The genealogist can find that related family weddings tended to be elaborate and written up in the Cleveland Plain Dealer.

So, the family history researcher will ask: who are the siblings of Margaret Hamilton and what became of them? That’s a good question for this genealogist to answer.

The children of Walter and Jennie Hamilton left Cleveland. They are:

All four of the children of Walter and Jennie Hamilton had access to almost everything money could buy in Cleveland. The history of Cleveland was also a part of their lives. But each, in their own time and way, found their fortunes outside of their home town and created their own legacy.

The family history researchers at RecordClick will help you with your genealogy challenges and your ancestry research. Our professional genealogists go beyond the usual internet resources. We will seek out the family’s documents thoroughly and find answers to genealogical mysteries.