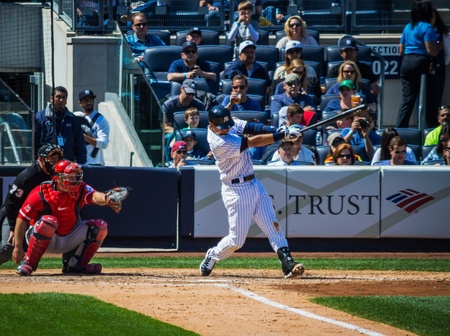 Genealogy research is a home run when it comes to Derek Jeter. The retiring baseball great has some major league ancestry with just about everything in his background. With a mixed African American paternal heritage and a combined Irish and German maternal ancestry, Jeter is a genealogy and Yankee fan’s dream.

Derek Jeter’s family is a genealogy home run! They have lots of nationalities mixed in and are a dream project for any professional genealogist or family history researcher. So, when he played his last all-star game this week, the legacy of his many family tree branches was right there before us on the field—strong and accomplished. Today, this this family history researcher wants to take a brief look at this amazing athlete’s genealogy.

First, the verb jeter in French means to throw, though the surname is said to possibly also come from German. Physically adroit, Derek, as genealogy and baseball fans know, has thrown far in his baseball career. A genealogy researcher might notice there are a few Jeter relatives who are athletic.

Our Derek Sanderson Jeter was born in the Pompton Plaines section of Pequannock Township, New Jersey in 1974.  His father is Sanderson Charles Jeter of Montgomery, Alabama, son of Lugenia. Derek’s father’s birth certificate would help our genealogy research to verify who his father was as well as whether Derek’s father’s name is Sanderson Charles or Charles Sanderson.  We’d need to researcher further the records on Lugenia and her family. Derek Jeter’s father’s extended family has been united in their genealogy research for a number of years. The living dream of a family history researcher: Over 500 are friends online and they say there are over 2400 known relatives, so far.

Let’s look at some possible genealogy leads of his father’s family. Derek’s father is said to descend from Green W. Jeter, b. 1844, Coosa County, Alabama, d. approx 1917. Green W. Jeter was considered Mulatto in Alabama. Green W. Jeter, the patriarch of the now-called Jeter-Lumpkin family, was a minister. Green W. Jeter was also a politician, who was an alternate to the 1888 Republican National Convention, according to the family group.  My next genealogy step would be to find Green W. Jeter’s birth records and those of his listed parents, including Green’s mother who may have been named Charity and, if so, would have to be verified by a genealogy researcher to be certain that she is the person listed in the will of James W. Jeter as his property passed down along with Charity’s six children to James W. Jeter’s daughter. 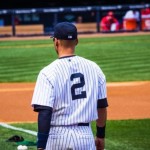 A genealogy dream, Derek Jeter has ancestors from many nationalities and locations.

Dorothy and William Connors, Derek’s maternal grandparents, known also as Dot and Bill Connors, had a reported fourteen children, one of whom was Dorothy, Derek’s mom. They still live in northern New Jersey where Derek’s family tree members planted him for summers during his childhood after his immediate family had moved to Michigan. The family is Irish and German—Irish through the Connors and German through the Teidemanns.

Oh and by the way, Derek’s great grandfather, patriarch John Tiedemann, made a good New Jersey land purchase from an estate sale in 1952.  He got the Gudewill Castle in Greenwood Lake. Derek repurchased it more recently through a holding company in the early 2000s. Locally, it is known as the Tiedemann Castle.  When searching for records, one will find that there are four John Tiedemanns buried in New Jersey.

A genealogist will ask if they all are related.  To find out, the genealogy researcher would next search for census details to clarify. From other sources, this family history researcher has found that the John (Henry) Tiedemann who was born in 1901 and died in 1981 is Derek’s great grandfather.  He owned a church painting company which helped maintain churches in and around Jersey City.  The company now called John Tiedemann Inc. is run by grandson Ray Tiedemann who is one of the patriarch’s 54 grandchildren. The company currently flourishes in North Arlington, New Jersey.

So, now we see that Derek himself has quite a large family tree and varied genealogy mix– the product of a white mother of Irish/German descent and a multicultural African American father.

Derek’s parents met when each was in the U.S. Army and stationed in Germany. The professional genealogist would verify these details with military records. Derek’s dad has a PhD from Michigan State University and works as a substance abuse counselor.  His mom works as an accountant.  Derek’s dad played baseball—shortstop—at Fiske College.  Is the genealogy of baseball and numbers/statistics inherited?  Sure bet with Derek!

This genealogy researcher has been pleased to watch this sports star grow in game and stature.  We remember his very first games in the major leagues. Twenty years of power playing!  That’s a genealogy home run, indeed.

RecordClick genealogy researchers will get home runs in your genealogy and find the all-stars in your family.  We will go way past the statistics so you can find out your genealogy details and even your DNA inheritance, too.  Contact us so our professional genealogists can hit it out of the park for you.