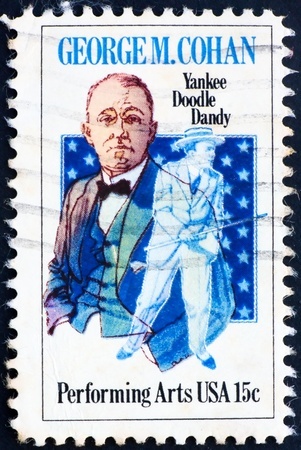 Summer is beginning to fly by for the genealogy researcher. Memorial Day remembrances are done and the festive Fourth of July is just around the corner. Time to bring out the bunting, banners, parades, fireworks and fire up the barbecue grill. This RecordClick genealogist does like the Fourth of July. When it comes to the good old red, white and blue, though, it’s hard to beat George M. Cohan.

This RecordClick genealogist does like the Fourth of July. When it comes to the good old red, white and blue, though, it’s hard to beat George M. Cohan. He was one of the most prolific Broadway performers with the more recent musical “George M.” and movie “Yankee Doodle Dandy” raising him to bigger-than-life status. A family history researcher will ask: Where did his flamboyance gene come from?

This genealogy researcher has found that story about being born on the Fourth of July is almost true. George M. Cohan was born on the Third of July in Providence, Rhode Island, according to this professional genealogist.

Then comes an interesting twist. It is one that makes genealogists sigh: George M. Cohan’s birth wasn’t registered in Rhode Island.

George’s mother is another example of what keeps family history researchers on their toes. On the birth certificate, she is listed as “Nellie”. On the 1880 Census, she is listed as “Ellen”. AND on the 1900 Census she is “Helen”. In each instance, family members and information need to be compared by the genealogy researcher to be sure the individual is one and the same.

The next step for us genealogy researchers is to look for the marriage of Jeremiah (Jerry) and Ellen, which was probably between 1872 and 1877. Keep in mind, genealogists, that this is a family on the move. A check of Rhode Island marriage indexes found Ellen Costigan marrying Jeremiah Cohan on 12 September 1874. I prefer the index on FamilySearch because it includes the first names of the parents. Jeremiah’s parents are Michael and Jane. Ellen’s are James and Mary. Jerry and Ellen were, of course, on the road at the time of their 25th wedding anniversary.

From the New Haven (CT) Register, September 6, 1899, p. 9: “…On September 12th, 1874, Jerry Cohan and Helen Costigan were married at St. Joseph’s Cathedral, St. Louis, by Rev. Father Bivina….” So, although the couple got their marriage license in Rhode Island, they married in St. Louis. The article mentions that Ellen lived a very sheltered life until she met Jerry.

I found Ellen’s family in the 1860 U.S., State of Rhode Island, County of Providence, 1st Ward of Providence City, Family 778:

Genealogical researchers should look for families in both federal and state censuses because these documents may be enlightening. They show changes in the family dynamics. The Cohan’s documents are certainly enlightening for the family history researcher. I found Jeremiah and his family in the 1850 U.S. Census and the 1855 Massachusetts State Census. In the censuses the family lived in Boston. First, the 1850 U.S. Census, p. 142, Dwelling 343, Family 1256:

In the 1855 Massachusetts State Census, the Cohans were family number 547:

The rest of the genealogical research story is that shortly after the 1855 Census, the family moved to Springfield, Massachusetts. In St. Benedict’s Cemetery in Springfield is a tombstone inscribed:

A check of passenger lists indicates that Michael Cohan probably came to the United States in 1841. Jane arrived in 1835. William Scott is most likely her father. Additional research should be done by the genealogical researcher to verify the information.

As for Jeremiah, growing up he must have been interesting for his mother, Jane. Jeremiah became “Jerry” and in 1869 his name starts showing up in entertainment ads.  For example, “Mr. Jerry Cohan, Exponent of Emerald Wit, Vocalist and Comedian.”  In that ad, his listing came after The Leon Brothers, Cowbellogians, Mr. Sidney Franks “Great English Comic Vocalist” and Mr. Wm. Ashcroft, “the popular Ethiopian comedian, song and dance artist and musician.”

The ads with Jerry’s name became more frequent and listings changed as the extended Cohan family became involved. Like father, like son and the energy of Jerry and George Cohan lit up stages across the United States for many years.

If you need a burst of enthusiasm and energy added to your family history research, contact the professional genealogists at RecordClick. We have a multitude of ideas for research strategies, understanding DNA testing and DNA results, locating living relatives or creating and publishing that special family tree.