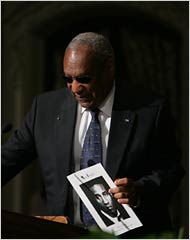 When the family of entertainer Bill Cosby lost their only son in 1977, the Cosby family tree was cut short and it was another disaster in the life of Bill Cosby. For the genealogy researcher, disaster can mean good records. For a person, disaster can mean–heartache, setback and life at its most challenging.

We genealogists, know that disasters mean there is a record of the details. Whether it is a newspaper record, a police record, a court record, a death record, it is there for the genealogy researcher to find and is often much easier to locate. It is an odd way of helping further the details of one’s ancestry.

For someone like William Henry Cosby, Jr., better known as “Bill”, the fame he has gained in the entertainment world does not erase the disasters that have happened to him along the way.

Anecdotal evidence will usually be the way the disease of alcoholism is documented. The genealogy researcher will likely have to do in-person interviews with friends and family members. There is always a possibility of hospital and police records. With Bill Cosby, whose father is reported to have descended into heavy drinking while Bill was a child, the records may come not only from a local medical or police report if there were any. Another way for the genealogist to locate records may be to look at the family’s living situation and how it changed. For the Cosby Family, which was living in the Germantown section of Philadelphia, financial troubles related to the father’s problems may actually be in the public record. They did move into nearby public housing for low-income families called the Richard Allen Homes. Records for those type of transactions may be searched for and found by an industrious genealogy researcher.

Disaster #2: Death of a Sibling

When he was 8 years old, Bill Cosby’s next oldest brother James died. This will most likely be detailed in death records, obituaries and perhaps a local newspaper report. The event was said to have been traumatic for the family. Of course, it would be. For those who know of the loss of a sibling, the genealogy researcher may need to go beyond the death certificate depending on the cause of death and the circumstances surrounding the event and do in-person interviews with family members. Sometimes, this type of disaster requires the genealogy researcher to do sensitive, important work.

In 1977, Bill Cosby’s only son, Ennis William, age 27, a doctoral candidate at Columbia’s Teachers College who had overcome dyslexia and was planning a career teaching special learners, was changing a tire after midnight in California along an isolated section of the freeway. He was shot and killed. The family was devastated. For such horrific events, the genealogy researcher can find records in formal death records as well as in the news reports surrounding such a great loss by a family. For those families who cannot find enough information, in-person interviews with people who either witnessed the event or with friends or relatives involved after the event may provide details for the family history researcher looking for more information. In an extreme case, the genealogy researcher could interview a person convicted of the crime such as the man convicted in Ennis’s death, Mikhail Markhasev who is serving a life sentence in Corcoran State Prison. But usually disaster details are more readily available and such difficult interviews won’t be a priority. 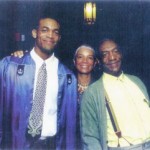 Bill Cosby, his wife Camille and their family faced a disaster–both personal and genealogical–with the murder of only son Ennis, left, at age 27.

While this was widely reported in the television and print media, there were legal documents and most likely, court filings. Records from courts can be helpful in the case of disastrous situations. If a case was settled, records from lawyers may be part of the genealogist’s research.

With all of the harsh happenings that he has had in his life, this entertainer has left a legacy of television acting work, comedy and characters—including Fat Albert—and has sustained a marriage that on January 25, 2014, made it to 50 years. He and his wife have been supporters of many charities and institutions. Even though he is in the public eye, Bill Cosby hasn’t been immune to life’s disasters. No hurricanes or storms so to speak, but life’s lightning has struck numerous times. The genealogy researcher knows, however, that life’s difficult situations and disasters provide a lot of details.

Does your family have events that you want more information on? Hire a genealogist from our international pool of experienced genealogy researchers. We will get you a family history that is filled with people, places, dates and more than you know now!