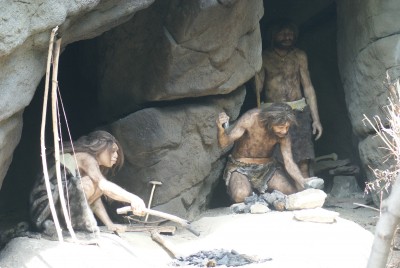 For those of you interested in DNA genealogy, don’t just stop with your g-g-grandparents. Consider tapping your ancient ancestry through family tree DNA testing. In addition to Homo sapiens, you may find some interesting relatives hiding among the leaves of your Genealogy Tree, including, but not limited to: European Neanderthals, Asian Denisovans, or pygmy Hobbits from the Indonesian island of Flores. The next time someone calls you a “Neanderthal” or a “Hobbit,” don’t whatever you do be offended. Just reply, “Thank you, they were some of my favorite ancestors.”

Recent DNA genealogy studies have shown that those of us of European and Asian extraction (i.e., non-African modern humans) are also of Neanderthal descent, with as much as 4% of our DNA deriving from the Homo neanderthalensis (i.e., Neanderthal), a species of human that became extinct, along with our other ancient ancestors, almost 30,000 years ago. Asians, Native Americans, and South Americans have an even higher percentage of Neanderthal DNA in their DNA genealogy than Europeans. This article will shed some light on our lost-but-not-forgotten ancestors, those people you never thought would share the limbs of your family tree. You will discover that we had more in common than you might imagine.

Most of you have seen the “March of Progress” illustration by Rudolph Zallinger — the 6-million-year depiction of human evolution, showing silhouettes of man in single file progressing through the ages, starting as a bipedal ape, moving through less-evolved ancestors, and arriving at our modern selves. Though humans did not evolve directly from any primates living today, we absolutely share a common ancestor with modern African apes, such as gorillas and champanzees. Though our last common ancestor species lived between 6 and 8 million years ago, human’s and chimpanzee’s DNA is almost 99% identical when you compare the bands on chromosomes. It’s how those chromosomes are put together that makes the difference. The human genome – the entire set of genetic information for every one of the 23 chromosome pairs – is not identical to that of any living primate. That is why we are evolutionarily, biomedically, and cognitively different from chimpanzees. Which brings us to Neanderthal DNA?

Before you deny your DNA genealogy ancestry, shaking your head and saying, “T’ain’t no way I’m related to a low-brow dullard Neanderthal,” bear in mind that anthropological research has found that Neanderthals were a more complex people than just a bunch of brutish cave people. Ian Tattersall, the curator emeritus of the American Museum of Natural History’s anthropology division, and Chris Stringer, a paleoanthropologist at the Natural History Museum of London believe that Neanderthals were capable of some abstract thought (possibly including language), canny hunting, adorning themselves with shells, painting their bodies with ocher and other colorful pigments, constructing well-crafted tools, as well as conducting simple burials. Stringer went so far as to say that Neanderthals were not so different from us as previously thought – the complex mind of a modern human ended up being wired differently from that of the Neanderthal.

[box] “I feel we are not yet close to a full understanding of [our] origins. In fossil bone and the DNA of every person alive today, there are still ancient stories waiting to be told.” From Lone Survivors: How We Came to Be the Only Humans on Earth by Chris Stringer, Times Books, 2012.[/box]

This is no fly-by-night theory. This is scientific ancestry by DNA. In 2010 the journal Science published the results of the Neanderthal Genome Project, which began in 2006. Under the aegis of the Max Planck Institute for Evolutionary Anthropology in Germany and 454 Life Sciences (a U.S.-based biotechnology company), geneticist Svante Pääbo and other researchers developed a new DNA sequencing technique that got results from old and/or degraded genetic material. The preliminary sequences gave compelling genetic evidence that the H. sapien and Neanderthal species have a lot more in common than originally thought; in fact, 99.7% of the base pairs of modern human and Neanderthal genomes proved identical. This suggests that some interbreeding occurred between the two species. These ancient trysts more than likely began occurring 60,000 years ago as modern humans made their move “out of Africa,” migrating to the Middle East where Neanderthals were living. Think of it as a little spice in your DNA ancestry.

Despite the similarities, however, there were 23 detected areas of the genome showing dissimilarities between the Neanderthals and modern humans. Pääbo explained that several of the areas of difference has to do with our brain structures. Even though the Neanderthal’s brain was just as large, if not larger than modern humans, its function, development, and the connectivity of the brain synapses between nerve cells were different from a modern human’s brain. In short, H. sapien brains are wired differently from those of the Neanderthal.

An earlier migration of various human species out of Africa to Europe, Central Asia, and the Middle East occurred around 700,000 years ago gave rise to the Neanderthal and Denisovan people. Neanderthals, who were considered Europe’s first inhabitants, were short in stature, light in complexion, with large jaws, sloping foreheads, and barrel chests. Denisovans were probably darker skinned and lived exclusively in Asia. (While Neanderthal DNA is found in the genomes of everyone who is not of African descent, Denisovan DNA appears only in people of Asian extraction, indicating that their DNA did not circulate to other areas of the world the way Neanderthal DNA did.) So, if you are of non-African extraction, then your DNA ancestry is almost guaranteed to include a little genetic material from your Neanderthal ancestors. Those people who remained in Africa became H. sapiens – also known as anatomically modern humans (AMH) – and had a fully modern appearance 80,000 years ago.

[box] “In fossil bone and the DNA of every person alive today, there are still ancient stories waiting to be told.” From Written in Stone: Evolution, the Fossil Record, and Our Place in Nature by Brian Switek, Bellevue Literary Press, 2010.[/box]

What happened to our Eurasian relatives? Why did our Neanderthal ancestors disappear around 30,000 years ago, leaving us the last humans standing? There are a lot of theories on this subject, including genocide by the superior AMH; evolutionary failings; a sudden and severe climate change; or disease brought by the AMH. An online article published by National Geographic – “Sex With Humans Made Neanderthals Extinct?” – referenced the Neanderthal-interbreeding study (co-authored by researchers at Arizona State University and the University of Colorado-Denver). Their findings? The two species “dissolved into a new species as a result of interbreeding” with more modern humans.

Whatever caused the extinction of our ancient ancestors, it did not erase the indelible mark they left on our genetic ancestry. This time of year is a good time to give thanks for our modern family, as well as our ancient family who did the best they could with what they had.

In biblical times, everyone married a cousin. In some countries, still, this is the preferred way...

A genealogy researcher can find his family's mental health history through traditional methods...